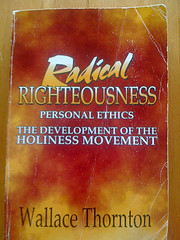 I am currently reading ‘Radical Righteous — Personal Ethics and the Development of the Holiness Movement’ by Wallace Thornton. Yet another book from Russell’s library.

This book traces the development and influence of personal ethics and outward standards from the start of Wesley’s ‘holy clubs’ up to the mid to late 1900’s when the Inter-Church Holiness Convention (IHC) was started.

The outward standards that ‘Radical Righteousness’ deals with primary have to do with dress and amusements. The dress issue deals with jewelry, wedding rings, modesty, gender distinctive clothing, and changing fads and fashions.

Secular and theological education, church architecture, slavery, the rights of women, centralized ecclesiastical hierarchy, and social respectability are also covered and to some degree interwoven with the issues of personal ethics and outward standards.

One thing that I found very interesting that this book brings out was the shift in the reasons for holding to a certain outward standard. In John Wesley’s day, the emphasizes for separation from the world and simplicity in dress was concerning the stewardship of your money.

My view is that this shift was caused to a great degree by the introduction of Phebe’s Palmer’s “altar theology” or “shorter method” to entire sanctification. Palmer’s “shorter method” taught that if you consecrated yourself a sacrifice on the altar to Jesus, the Spirit would sanctify you entirely.

This was a move away from Wesley’s longer route of partial or gradual sanctification as part of the path to entire sanctification.

We can see clear examples of the results of this error in the Pentecostals and the Church of God Anderson and other One True Visible Church (OTVC) groups that teach entire sanctification as a second work of grace.

For the Church of God Anderson and other OTVC groups, the evidence of entire sanctification likewise became standards that could be copied even by those that are not regenerated. Depending on the group, the submission or consecration issue could be having “a vision of the church” — meaning seeing that your group was the only true visible church, “seeing eye to eye” in doctrinal and outward standards, “trusting the Lord for healing” — meaning not using doctors or medication — and submission to the ministry.

If you were seeking for entire sanctification at the prayer bench in a OTVC group, the minister that was praying with you might ask you if you were consecrated to trust the Lord for healing, or submitted to obey those ministers that the Lord had put over you, or if you were humble enough to lay down your own opinions (doctrines) for the sake of unity, or you had “saw the church” and were ready to “take a stand with the saints”.

The original emphasis in Wesley’s teaching of entire sanctification was to be made free from the sin nature or inbred depravity, by carnality being erradicated experimentally and the person being brought into the state of perfected love.

Both the Pentecostals and the Church of God Anderson and other two-work OTVC groups replaced the original emphasis of Wesley’s standard for entire sanctification and moved Wesley’s standard to the back burner, and then eventually dropped it.

Not only have the Pentecostals and two-work OTVC groups put their stamp of approval on those that have only measured to an outward standard as being entirely sanctified, but the modern holiness movement has made the very same mistake.

In my opinion, the substituting of outward standards as the evidence of the inward work of entire sanctification is one of the primary reasons for the decline of piety, not only in the holiness movement, but also in fringe, two-work OTVC groups.

When it came to living out the standard of entire sanctification, it was more about unity of doctrine and outward standards, submission to a ministry that was inclined to macro-manage the lives of the lay people, refusing to take medications that the ministry deemed banned, and holding that the COGR was the one true visible church then a standard of deep, personal piety.

In doing this, we shouldn’t be surprised if those that settle for a low standard will claim that we are teaching it higher than it can be lived. This is the very same thing we will encounter in the standard of regeneration when we deal with sin-you-must teachers.

Typically ministers won’t teach a standard of piety or bring the lay people to a higher standard of piety then they are living themselves. If the ministers are carnal, for the most part they are going to produce carnal converts, and the majority of the people in the congregation will be carnal people.

Prayer, meditation, and study of the scriptures concerning this subject are the order of the day. The reading of those ministers who have obtained to this experience will also be a help to you. God has given them for “the building up of the body of Christ” (Eph 4:12 NASB) until we attain to “the measure of the stature of the fullness of Christ” (Eph 4:13 KJV) and though they “being dead yet speaketh” (Heb 11:4 KJV).

In closing, let me add John Wesley’s exhortation on how to seek entire sanctification, for those who are not entirely sanctified.

Not in careless indifference, or indolent inactivity; but in vigorous, universal obedience, in a zealous keeping of all the commandments, in watchfulness and painfulness, in denying ourselves, and taking up our cross daily; as well as in earnest prayer and fasting and a close attendance on all the ordinances of God.

And if any man dream of attaining it any other way, (yea, or of keeping it when it is attained, when he has received it even in the largest measure,) he deceives his own soul. It is true, we receive it by simple faith: But God does not, will not, give that faith, unless we seek it with all diligence, in the way which he hath ordained.
–Plain Account by John Wesley Chapter 19