How To Grow Wheat Grass 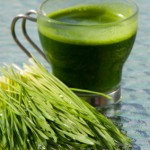 Here is two YouTube videos by Jyna on growing Wheat grass. She has things down pretty good as she is getting a yield of 16oz per tray (give or take 4oz).

Planting to harvest in 7 days.

1. Put 1.5 cups (300g) of wheat kernels in a bowl with 3 cups of filtered water and soak for 12 hours. This is for a (8″ x 20″) tray. Don’t over seed your trays as this can cause the Wheatgrass to not wrong as well.
2. After soaking for 12 hours drain and rinse the wheat kernels.
3. After rinsing cover the wheat kernels with a wet towel and keep it in a dark and cool place and rinse the wheat kernels twice a day.
4. Within 1 to 2 days the wheat kernels will sprout little white tails about 1/4″ long and are ready to put in trays.
5. Put paper liner in the bottom of your trays so the soil will not wash out.
6. Put 1″ of EKO Organic Compost from Home Depot in your growing tray.
7. Sprinkle 1 table spoon of Azomite over the compost and mix it in.
8. Evenly spread the sprouted wheat kernels into the tray.
9. Water the tray until the compost is moist and dripping out the bottom of the tray.
10. Cover the top of tray with a wet newspaper and plastic wrap and put the tray in a cool dark place. Water twice daily.
11. In 1 to 2 days shoots will be 1″ tall, remove the newspaper and plastic wrap and put the tray in the sun.
12. Water every day and keep the soil moist. Add a drop of tree tea oil and a drop of lavender oil per 500ml of water for an anti-fungal into mister and mist the trays for the first 3 days.
13. Harvest after 7 days, it should be 6″ to 7″ tall. Cut the Wheat grass as close to the soil as possible.
14. Harvest even if you can’t use the Wheat grass. Bag the Wheat grass and store in fridge for up to a week.
15. Juice your Wheat grass top down for the best yield and more nutrition.
16. Use a Lexen Manual Healthyjuicer to juice your Wheat grass.

16 Responses to “How To Grow Wheat Grass”